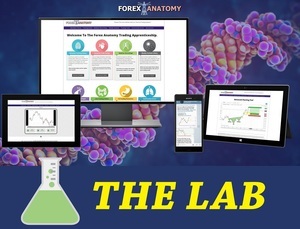 The Sad and Disheartening Truth About Currency Trading in 2020
Video: Where Is The US Dollar Headed? – Technical Tuesday
Week Ahead – Central Banks Take Center Stage In Markets
Video: Two Possible Scenarios For EUR/USD – Technical Tuesday

Fundamental Outlook For Week of September 30, 2019 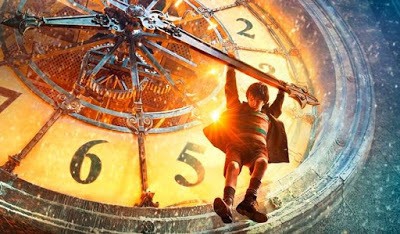 The Dollar has fared well among currencies, after a week of relatively quiet, and yet bumpy market behavior, as on-going political uncertainty continues to weigh on risk-oriented assets and entice investors to prefer the safe haven buck.

The start of the 2019 fourth quarter, which technically begins on Tuesday, will have a calendar week that is full of market-moving data, with the release of more September PMI readings, an RBA (Reserve Bank of Australia) rate decision, and the all-important US Non-Farm Payroll Report, raising volatility levels for this new week of trading. Since Monday is the official final day of Q3, there may be a carry-over of further portfolio re-balancing and window dressing operations from last Friday, that may introduce unusual volatility for the first trading day of the week.

Trading volumes from Asia are expected to be thin, from Tuesday into Thursday, as Chinese markets will be closed in celebration of National Day & Golden Week. But, prior to Asian traders leaving their desks for the holiday, the Red Dragon will release their official readings for Manufacturing and Non-Manufacturing September PMIs, as well as the Caixin Manufacturing PMI.

The world’s second largest economy is experiencing a slow down in their manufacturing sector due to it’s on-going trade war with the US, and their efforts to improve on the services & consumption side. The nation’s official September manufacturing PMI is forecasted to stay unchanged at 49.5, with their services PMI improving to 54.20, from August’s figure of 53.80. The Caixin Manufacturing PMI is expected to ease slightly to 50.2, from the previous reading of 50.4, which is still in expansionary territory. If Chinese PMIs fail to meet their expected figures, or fall deeper into contraction (below 50), then we can expect some risk aversion, with the yen and greenback benefiting, while the risk sensitive Aussie & Kiwi suffer. 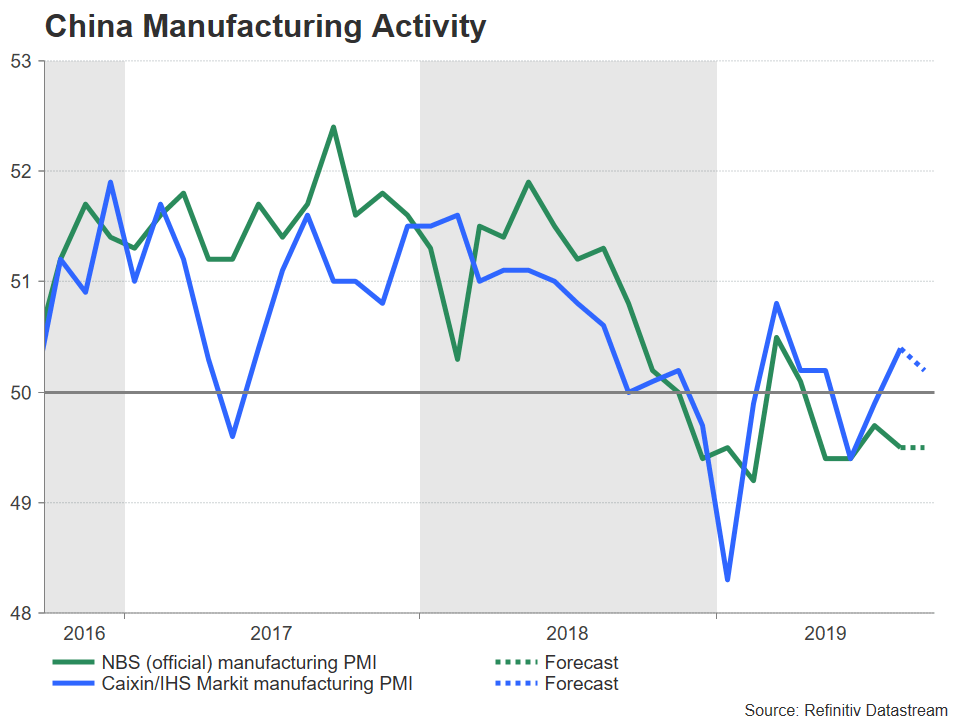 On Tuesday, the Reserve Bank of Australia will be publishing their monetary policy statement, and interest rate decision, with financial markets already discounting a 25 bps cut to 0.75%, which would be a new record low for Aussie. However, recent statements from RBA governor, Philip Lowe, took markets by surprise, when he stated that the Australian economy has reached a “gentle turning point”, which was surprisingly more optimistic than expected. Although the market has priced in an 80% probability of a RBA rate cut of 25 bps, this recent statement from Lowe leaves room to assume that a rate cut at Tuesday’s meeting is not guaranteed. This absence of clarity may cause some short-term traders to remain neutral on Aussie, and wait until after the October 1st meeting to decide on a position.

The Australian dollar is likely to come under initial pressure from a rate cut, but we may also observe a “buy the news, sell the rumor” reaction since a rate cut has already been discounted. The bigger focus will be on whether the RBA will signal future cash rate reductions and their outlook on the status of their domestic economy. A hawkish cut could also see the aussie spiking higher.

Investors should also keep an eye on September Services PMI and August Trade Balance on Thursday, as well as August Retail Sales on Friday that will also impact exchange rates in the Australian Dollar for this week of trading.

Not Many Catalysts For Euro and Pound

Last week’s trading activity highlighted a weaker tone in both the common currency & the sterling spawned by discouraging political & economic data from the region, as well as resurgent US dollar demand. Eurozone growth concerns and Brexit-related fears have dragged both currencies to fresh lows, and there are very few catalysts that will boost either currency during this week of trading.

In the Eurozone, attention will be directed towards the German & EU preliminary (flash) inflation prints for September, that are scheduled to be released on Tuesday. Both headline rates of inflation are expected to hold steady at 1.40% y/y for Germany, and 1.00% y/y in September for the European Union. The Core CPI reading for the EU is expected to tick slightly higher to 1.00% y/y in September, versus last month’s reading of 0.9% y/y. This data is not likely to motivate the euro in any direction, as the ECB (European Central Bank) is expected to maintain their monetary policy position for the time being, considering the internal disagreements over the need for additional monetary easing, as well as the imminent appointment of Christine Lagarde as the new ECB president. If the inflation readings disappoint & underwhelm market forecasts, then we may see a devaluing of the euro, but not enough to warrant an adjustment in the ECB’s monetary policy stance.

Across the channel, in the UK, revised GDP estimates and UK Markit PMIs should incite some volatility in the pound, but not merely as much as new headlines & developments surrounding Brexit. On Monday, the UK will release their 2nd estimate of Q2 GDP, which is expected to improve slightly to 0.5% q/q from a previous reading of -0.2% q/q. Even if this reading is reported as better-than-expected, this growth indicator will still do little to boost sterling demand.

There is likely to be a more muted response from the UK manufacturing, construction, and services PMI prints that are scheduled to be released on Tuesday, Wednesday, and Thursday, respectively. Contrary to the Markit Manufacturing and Construction PMI readings, the British Services Sector, which is the nation’s largest sector, continued to expand in August at 50.6. For the month of September, analysts are expecting a slight drop to 50.30, which is still in expansionary territory. Although the UK Markit Services PMI is the largest and most important PMI print, any drop in this value below the 50 threshold may still not stimulate a significant reaction in GBP (sterling). 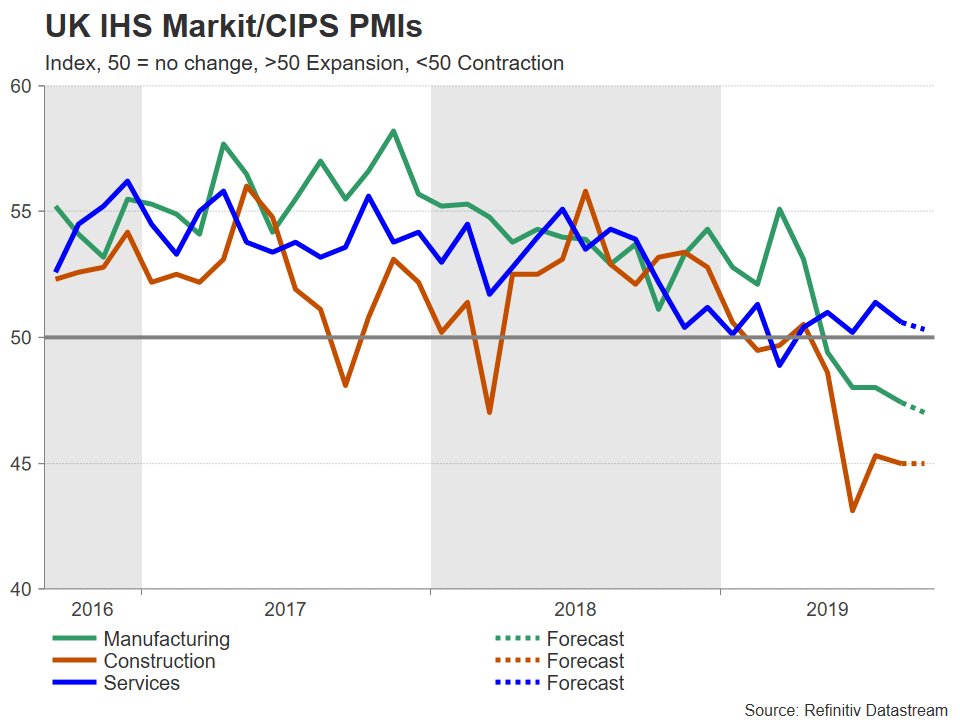 US Dollar Outlook Ahead of ISM PMIs and Non-Farm Payrolls

Since the US Federal Reserve Bank is scaling back their stance on aggressive rate cut expectations, investors are marginally adjusting their bets towards more monetary easing. This would imply that there is a considerable chance for the greenback to appreciate if US economic data continues to alleviate recession fears.

One of the top three US market indicators that we are eyeing for this week will be Tuesday’s ISM Manufacturing PMI print, which is expected to come in at a reading of 50.00, after falling into contraction territory (49.10) in August. Analysts will also be reviewing the Employment component of this survey for additional clues on Friday’s Job’s report. The US ADP Payrolls number, which reports private sector job growth, will be released on Wednesday and this reading will be used to shape conclusions for the official BLS employment report on Friday. The ISM’s non-manufacturing PMI will follow on Thursday, with analysts forecasting a slight drop to 55.8 in September. Factory orders are also due on Thursday, before attention turns to the Non-Farm Payrolls report on Friday.

With August’s Non-Farm Employment reading disappointing market participants with a reading of only +130,000 jobs added, Friday’s Non-Farm Employment reading is anticipated to only slightly improve to +140,000 jobs added in September. Since July’s Non-Farm Payroll Reading also underwhelmed expectations with a rise of only +159,000 jobs, any new employment print that meets analysts expections or fails to beat the forecast, will prove that job growth is slowing down in the United States, and this may shape Fed Monetary Policy in the near future.

An overall stronger-than-expected payrolls report could encourage the US dollar index climb beyond the current 3-week top. But, if the greenback’s advances are not reinforced by a similar move in US Treasury yields, then weak jobs numbers on Friday could lead to a sharp tumble in the buck. An increase of over 200K is needed to convince markets that the labor market remains robust.

The US unemployment rate is forecast to remain unchanged at 3.7%, while average hourly earnings are projected to have increased by 0.3% month-on-month.

If you have not joined our trading laboratory and community for only $1.00, and would like to learn more about our trading apprenticeship program, then click on the link below for details.

About the Author Marvin Perry

Marvin Perry has been an active trader within the Forex market since 2010. He attended the University of Illinois in Urbana/Champaign, and graduated in 2002 with a double major in Cell and Structural Biology and Chemistry. He currently serves as an FX instructor & Quantitative Analyst for the Forex Anatomy Private Trading Community called "The Lab", where he conducts live weekly trading webinars & instruction on Fundamental Analysis & Inter-Market Interpretations of dynamic asset classes and their influence on currencies.

The Sad and Disheartening Truth About Currency Trading in 2020

US GDP Growth at 3.7% Annual Rate in Second Quarter